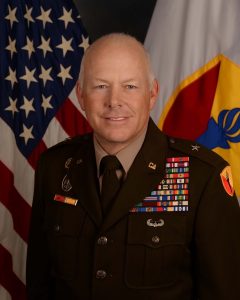 Brigadier General (CA) Peter B. Cross enlisted in the United States Army in 1987. After serving in this capacity for two years, he received his commission as a Second Lieutenant from the University of California at Berkeley in 1989. He has served in numerous command and staff positions from Platoon Leader to his current assignment as Commander of Youth and Community Programs Task Force in the California Military Department.

BG Cross is a graduate of the United States Army War College (USAWC) with a Masters of Arts Degree in Strategic Studies. He has graduated from the USAWC Defense Strategy Course, the Advanced Operations Warfighting Course (AOWC), the United States Army Command & Staff College, and Combined Arms Staff Services School. He is a graduate of the Military Police Officer’s Basic and Advanced Officer’s Course and the U.S Army Air Assault School (Fort Campbell, Kentucky).

BG Cross is a lifelong resident of Northern California where he resides with his wife Melinda.