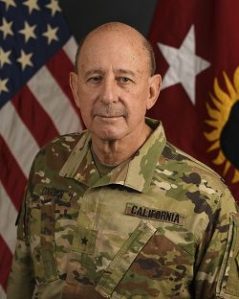 In addition to serving as the Commanding General of the California State Guard, Major General (CA) Jay M. Coggan currently serves as the Chief Counsel – Cyber Operations for the California Military Department. In this capacity, he is responsible for legal issues in the realm of cyber defense for the California National Guard’s mission of defense support of civil authorities, and the protection of California’s critical infrastructure.

Prior to taking command of the California State Guard, Major General Coggan was the Commander of the State Guard’s Legal Support Command. As a designated subject matter expert by the California National Guard and National Guard Bureau regarding the (SCRA) Servicemembers Civil Relief Act and issues affecting deploying service members, he regularly briefed and trained Judge Advocate General (JAG) officers of all service branches, both in California and around the country.

Major General Coggan grew up in Bridgeport, Connecticut. After graduating high school, he attended the University of Connecticut, but left school in 1967 and enlisted in the United States Navy. Major General Coggan was trained as a combat air crewman, and during his service he was deployed with Navy Patrol Squadron One for three tours to Vietnam.

After returning from active service, Major General Coggan completed his college education in Connecticut, and then moved to California to attend law school.

He has been practicing law since 1979, and has been licensed in California, New York, and the District of Columbia. He is further admitted to practice before numerous United States District Courts in California, New York, Michigan, and Colorado and several Circuit Courts. The primary emphasis of his legal practice was business litigation with a focus in the areas of intellectual property and technology.